The more things change, the more they stay the same. Think back less than ten years, and you find a search space that’s dominated by Paid Search Publishers, driving traffic to merchant sites via bridge pages. Let’s call this the Old Bridge Page World (OBP World).

This practice was quickly squashed by Google in 2011. Their philosophy of giving users a high-quality online experience was clearly at odds with the extra step in the customer path.

After this, if you want to run traditional Paid Search as an affiliate, you have to land users directly on the merchant’s page or at the very least ensure your site had unique content. This immediately causes problems, leaving very few true Performance Paid Search Publishers in the space.

Fast forward eight years, and it seems that we have returned to a search space which is once again dominated by Paid Search Publishers. The laws of this new world have changed, however. I am of course talking about the introduction of Comparison Shopping Services (CSS) into the Google Shopping auction.

Whilst the world we find ourselves in seems new and foreign, there are still ways in which it is familiar. So, how does the OBP World stack up against the newer world of CSS?

How have we have come full circle?

I know that we are all well versed in the birth of CSS, but the context here is crucial. I will, however, keep it brief. Please feel free to recite along with me.

Back in 2017, Google was fined £2.1 billion by the European Commission on anti-competition grounds for promoting its own shopping service and supposedly deranking others organically.  As an aside, I think this is odd – Google was still promoting the Merchants, not Google Shopping – but I digress.

This ruling gave rise to our new world order, with Google deciding to launch the CSS program to counteract the judgment passed down by the EC. Despite the fact that these comparison shopping sites are still driving direct to merchants sites – and paying Google for the privilege of doing so – this was deemed an appropriate solution.

Regardless, this was not enough. Traditional CSS were slow on the uptake, so Google reached out to Agencies, invited them to create their own in exchange for cheaper CPCs. A controversial method, but it stands for now.

So how does this new world (figure 1.2) resemble the old one affiliates will remember well (figure 1.1)? 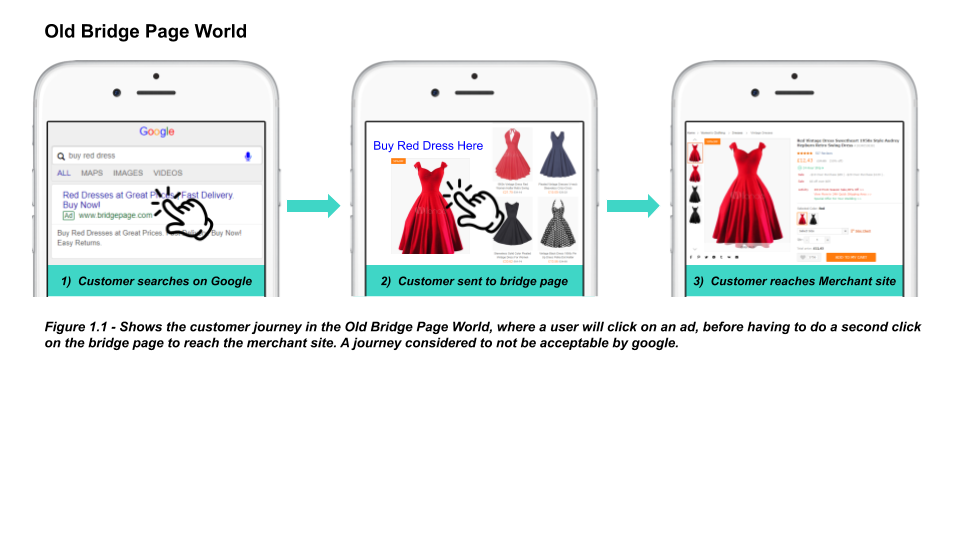 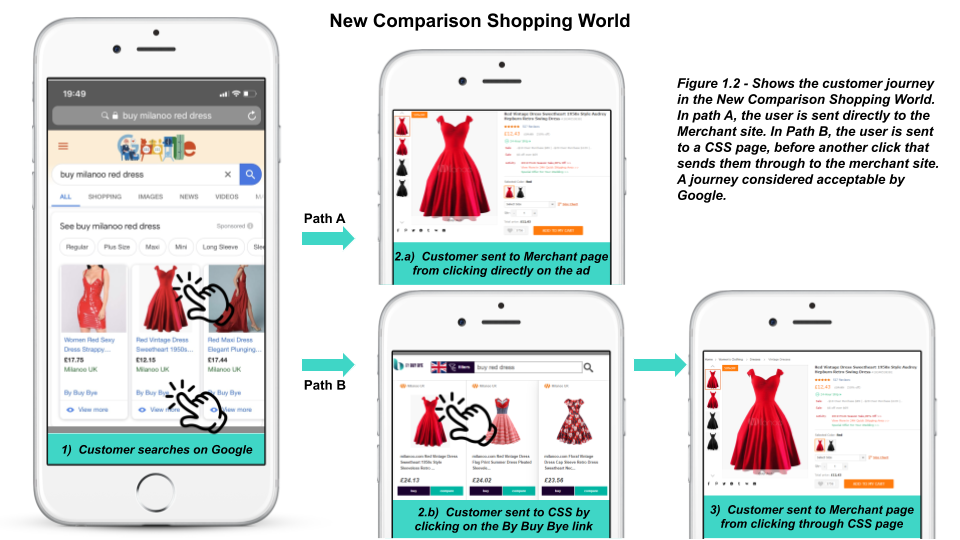 What does this mean?

The quick-thinkers amongst you will have picked up on a potential problem that will persist from the old world: Google’s philosophy of high-quality user experience. The biggest outcome of this would be the imposition of stricter and stricter rules on CSS website quality.

According to an analysis conducted by NMPi, the number of customers who actually click on the CSS button is as low as 2 in 1000, making bridge pages 99.8% less of a problem than during the OBP world. It’s likely, then, that Google will sweep this under the rug. Even so, Google is constantly updating its regulations, meaning that anyone using a CSS will have to ensure they dedicate enough resources to ensure compliance.

Not only does the CSS programme get Google out of trouble with the European Commission, but it also gives them a chance to inflate competition. So even though they lost money in the short term, inflating competition lets Google line their pockets with some additional Euros, Pounds, Krona..you name it.

I doubt that Google will rest on their laurels here, with a whole world outside of the EEA that aren’t on the programme. I suspect on the back of this, they are totting up the numbers and realising the increase in revenue that would come by introducing CSS globally; bringing in a new era of Worldwide CSS.

What does this mean for affiliates?

Let’s take a moment to crunch the numbers, shall we?

According to eMarketer, the US spends over $5 billion on affiliate advertising every year. For argument’s sake, let’s say that this is the same in the EEA. The EU is also estimated to spend $17.86 billion on Search in 2019, with 90% of this going to Google. A bit of quick math and that’s a total of $16.07 billion spent on Google Search this year.

$2.12 billion potential spend for an industry of $5billion.

For the affiliate industry, the impact is clearly huge.

But affiliates need to be careful

Before your eyes widen too much, let me issue a word of warning. While the door has been opened to a considerable new revenue source, CSS Publishers must make sure they are offering added value, otherwise more and more advertisers will choose to operate outside of the affiliate networks.  We saw this happen in the OBP world, where affiliates got a bad name by over-indexing on branded keywords – offering little value to the lower branches

To avoid repeating the same mistakes, CSS Publishers should ensure that they are offering coverage across all search term groups and products, in order to give clients value across all performance bands. You will also need to work closely with in-house teams to establish KPIs, and even target different areas than in-house teams.

The key here will be transparency. This includes accurate reporting on performance metrics and where they’re coming from, as well as an open and regular dialogue with in-house teams to create a collaborative working relationship.

Challenges that come with this?

Fresh meat to performance paid search, may not consider the risks behind an upfront cost, but it can be problematic. There are a couple of things that you should keep in mind from your client’s perspective. 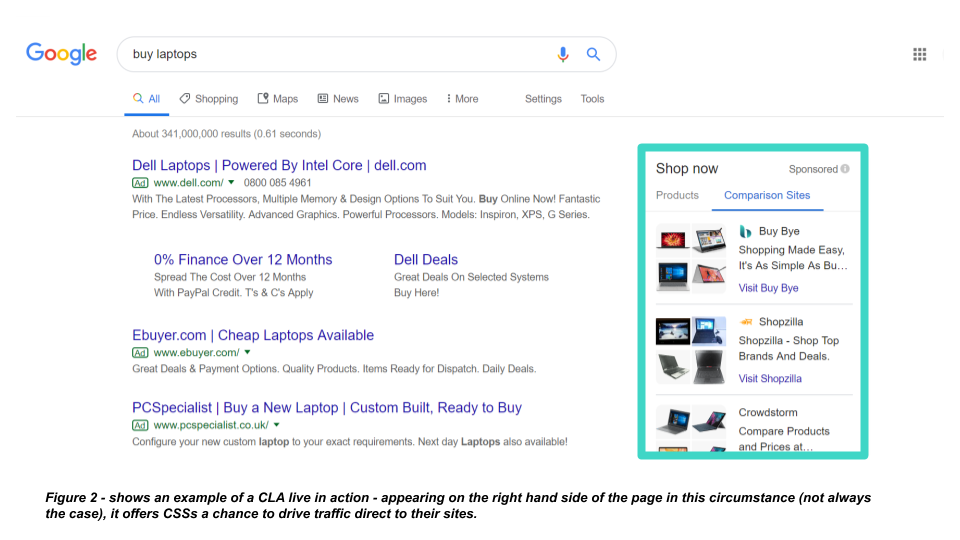 The recent launch of Comparison Listing Ads (CLA) has opened up some inventory never before available, and only available to CSS. Presumably, in order to achieve the goal of driving more traffic to the CSS websites, appeasing the EC and the CSS, given that the current traffic to the site is still not a large percentage of the total clicks.

Whatever the reason, it has opened up a new traffic source for CSS, a new way to generate revenue, and this real estate is not available to Traditional Google Shopping Providers.

Traffic has considerably increased over recent weeks, opening up the same challenges seen above, with the additional challenge of tying conversions back to specific campaigns in Google Ads and Search Ads 360. The challenge presents itself due to this click in the customer journey, and the disconnect between the tracking between the three services (Google, CSS and Merchant).

Crack this, and you will crack CLAs, and be the first to start driving value from this new exciting and strange ad format from Google.

The tradeoff for having CSS is likely to be deemed worth it as a result of warding off the European Commission and inflating CPCs. Despite the traffic through the ‘by CSS’ click being as low as 2 in 1000, Google will still continue to push CSS to improve their UX as every customer counts. Once they are happy with the quality I suspect it will be rolled out further afield off the back of conclusive incremental revenue analysis.

The doors have been opened for the affiliate industry to make the most of a new market with huge potential across the board! Including a brand new format, in CLA, which is a classic affiliate-style arbitrage opportunity on the SERP itself. Something unimaginable just a year ago!

It is important that we do not repeat the same mistakes of the past, and find ways to offer value to this rapidly expanding revenue source. This needs to be done through open dialogue and transparency with advertisers, all the while ensuring campaigns overcome challenges associated with upfront costs and disconnected attribution.

How Can Advertisers Make the Most Out of Browser Extensions?

How to Earn Passive Income With an Amazon Affiliate Store